JAMstack problems? Throw them up on the Netlify Forums and I’m sure we can sort it out! 🙂

As with any Discourse forum for a site hosting provider, we see all sorts of questions on The Forums. Ranging from HTTP headers for streaming protocols to undocumented Netlify Identity API concerns to Netlify’s hosting platform running on renewable energy. All said and done, we constantly see questions and stuck folks that need expertise from all over the modern development stack. Far more than what could ever be asked for from the official support staff - after all, Netlify is a hosting provider. There are a lot of questions that pertain to an individual site build being broken that have nothing to do with the hosting!

But, on the other hand, that’s what makes it fun. I get to see, think about, and debug questions with little context and (not too rarely) a lot on the line. It’s something we do for free as Pilots because we care about the platform and the community. We want to see developers succeed.

Plus I get this cute little floof-ball added to my avatar on The Forums. Who doesn’t want that?! 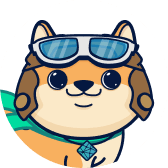 Well that’s a mouthful. Anyway, after writing Trailing Slashes on Netlify and doing significantly more work in researching Netlify’s web-server routing parlance for documents / directories (as it pertains to classical webserver foo/ = ‘foo’ Directory and foo = ‘foo.html’ document), I wrote up this feature request to help others navigate the Netlify Admin UI with more clarity around the impact they’re making.

A persnickety issue with a complex touch! The bummer here is that Netlify’s _redirects engine (officially the runtime is netlify-redirector) is one of their few closed-source projects. It is available if you dig through your node_modules but it’s compiled to WASM in a particularly unreadable flavor. Since the redirection runtime runs on the edge and there’s probably no simple way to run multiple versions of it, changes to the redirector are a bit rare, and extremely careful. It’s not clear when this will be fixed, but I imagine it won’t be soon.

Netlify Identity and Functions Together

This was a great learning and experimentation thread between myself and Raymond Camden, a frequenter of The Community, and serves as publicly available documentation for those seeking it. It walks through how to utilize Netlify Functions to run admin commands (and effectively administrate) the same site’s Netlify Identity instance. Some pieces of this workflow are poorly documented in the actual code / README, so this thread is a value.

Easily my longest thread at 102 total replies, this was a long learning progression with another Netlify Community frequenter. The long story short is that Netlify Identity-powered role-based _redirects are kludgey at best and should probably be avoided if it’s possible. Utilizing client-side routing and content gating is going to be a better experience. Netlify Identity uses both LocalStorage and HttpOnly cookies and they can behave differently, unfortunately.

The saga continues 😁 although this one began some months later as another user was following up on a bit of the original threads above — I think I formalized some of the pros and cons to using role-based _redirects and their dependency on cookies pretty well in this one. I even got a “this is an epic reply” response. Nice! For my own future self’s sake, the key notes in the thread can be found right under “Re: the cookie-based _redirects”.

More of a bookmark than something I was involved with directly, but a valuable piece of knowledge that I don’t think many know (not that it matters too much), Netlify Deploys live forever! Long after your PR branch is merged and the project has moved forward, the preview deploys in from your PR development are still out there! …somewhere…

One of the threads I actually wrote before becoming a pilot! Lots of questions - mostly pertaining to the workflow of using Netlify on a team that needs local, PR environments, and a ‘production’ environment. The tl;dr: is that Netlify totally supports that, but the UI doesn’t always show it that way. ENV vars can also be particularly tricky since they’re handled differently per environment and different whether they’re in the netlify.toml file or added via the Netlify admin UI.

This thread ended up being a great overview of the React paradigm for rendering out the DOM tree on the server, sending that HTML to the client, then hydrating the DOM on the client - the core premise behind Gatsby and Next.js (when exporting to static). Valuable information to understand deeply.

This thread just turned out to be a great primer for understanding how Next.js has multiple workflows and can operate in a number of ‘modes’, each with their own pros and cons!